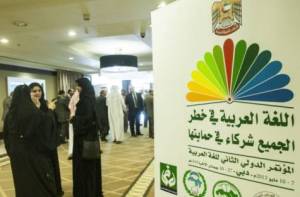 Taken from Gulf News article May 2013

It has been a while since I last wrote, first, I’d like to welcome to new readers (from Turkey and China) and secondly, thank everyone for sending in emails and messages.

The month of May saw the 2nd international conference on Arabic language in Dubai that took place from the 8th until the 10th of May, it attracted over 1,000 participants interested in the future of the Arabic language. the conference was titled, “Arabic Language in Danger: All Are Partners in Protection”. The theme was of course to explore the use of Arabic and its status in Arabic speaking countries (specifically the Gulf and UAE regions) and the overwhelming conclusion of that conference was that the Arabic language is in danger of attrition or loss because of the starling low levels of speaker proficiency among native Arabic speakers. There are many reasons why Arabic language seems to be in the situation it is in, and I have discussed these before for example, schooling standards, perception of the language by speakers and so on. The experts at the conference concluded that, something needs to be done about the current situation otherwise Arabic really will be lost.

The minister of Culture, Youth and Community Development Sheikh Nahyan bin Mubarak Al Nahyan, said at the conference that, (taken from Bikyanews article)

“Our duty towards the language of the Holy Quran is to grant it the natural status it deserves in historic, social, cultural and educational spheres”.

”The danger is not targeting the language as a means of learning, scientific research, translation or publishing; rather, as I see it, it lies with keeping the language away from its natural place in schools, government offices, banks, factories, media and advanced sciences and technology,” he remarked.”The danger”, he went on to say, ”lies with raising a new generation commanding foreign languages and neglecting their mother tongue.” Sheikh Nahyan warned that globalization is another threat to the Arabic Language, citing the adverse impact of social networks on the language.

”The real danger is in turning a blind eye to the findings of research and studies recommending promotion of the language, and its role in the development and progress of the individual and groups. Adopting sterile curricula and learning methods are among many threats to our language,” Sheikh Nahyan explained.

Gulf News printed a similar account of the conference, as did Khaleej Times, interestingly there were differences in opinion as to whether the Arabic language was in danger or whether it’s speakers were in danger of losing it (is there a difference I wonder, since I understand that it’s through speakers that a languages thrives or declines) I have cited the differences below (from the gulf news 2013 article),

“Some of the challenges they face, are the spread of foreign languages, especially English and its dominance in general interactions and communication; the different Arabic dialects that are popular around the different Arab countries and globalisation that is spreading like wildfire between our children.She added that an outdated school curriculum also adds to the problem.

“There are many challenges, but there is hope in overcoming them as much as possible — each person within his own capacity.”She said that she had organized an initiative called “My language my identity” in December last year, which included many activities to promote the Arabic language such as plays, lectures, exhibitions, brochures and posters.

Dr Amal Shafeeq Al Omari, Professor of Arabic language and grammar at the Middle East University — Jordan, said that Arabic language is in danger and is facing steep hurdles.

“We now exchange greetings on our special occasions in English through text messages or social medias, also passersby in our countries are shocked to see the English names of shops and restaurants with absence of the Arabic name… also each job seeker makes sure that his CV is in English as if it’s the country’s official language.” Amal said.A nation that gives up its language or disrespects it, gives up its soul and mind and loses what makes it different,” she said. “Defending and protecting the Arabic language and bringing it back to the lead, especially in our day-to-day interactions, has become a religious and national duty.”

So I think we need to decide is it in danger? If so how? Is it not in danger? If so why not? What research have we conducted to draw such conclusions? These are important questions and must be answered with evidence no doubt.

The National also ran a story of “Arabic losing ground among native speakers”, one writer noted that, “The danger lies not in the fact that English is the language of instruction, but in that it has become the language of off-campus communication between students and, in some cases, between them and their parents at home,” Al Suweihi wrote.While educators, students and parents have a shared responsibility, the problem is much bigger, he said.

“In fact, the issue is closely linked to the moral value of the language, a value that is derived from the political, scientific, economic, industrial, intellectual, artistic, cultural and social reality of its speakers,” the writer observed.”The younger generation of Arabs shuns Arabic because they feel inferior when they speak in that language. However, they associate English – the global language of science … computers and technology – with privilege, and with belonging to a civilised society.”

I agree that many times English is blamed but it is to do with more than just language instruction, it is also to do with the psychological motivation an Arabic speaker has for their language. I am always intrigued when such articles are written and such conferences take place because I get a sense that the problem is becoming more and more researched and hopefully a solution will be reached. The challenge is a difficult one, it’s a balancing act between modernisation and language preservation..not easy though not impossible. It cannot be imposed by a body, it must come from within the people. It seems the first steps towards addressing the problem are underway….. I have put all the links on these stories so you can read them in their entirety.
————-