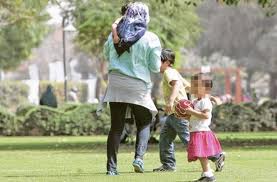 The relatively new Early Childhood Development centre launched in Abu Dhabi under the patronage of the Sheikha Salama bint Hamdan AlNahyan Foundation, has began researching the effects foreign maids (may) have on the language development of young Emarati children. The centre is concerned with the development of children between the ages of 0-5 and language is an important area they are focussing on. Gulf News (08th Feb 2014) reports that,

Child development experts in the UAE have long wondered if exposing children to nannies from foreign backgrounds at a young age could hamper their overall development.

A new study will now look into the effect of these nannies and other caregivers on children’s language skills, including fluency in their native tongue, the researcher told Gulf News.

“It is very common for children in the UAE, especially those from Arab families, to be taken care of by housemaids and nannies. These caregivers usually come from non-Arab backgrounds, and such exposure could have a significant impact on language abilities,” said Dr Huda Al Danhani, resident doctor at Tawam Hospital’s paediatrics department in Al Ain.

“Unfortunately, not much research exists on this phenomenon. My study will therefore focus specifically on language development, which takes place mainly between the ages of two and three,” she added.

The research will be conducted over the next year as Dr Huda pursues a fellowship at the philanthropic organisation, the Salama Bint Hamdan Al Nahyan Foundation. For this first phase, Dr Huda will study children using information that is provided when families visit hospitals and nurseries across the UAE.

“I have not yet decided on a method of collecting information. But I hope to gather data on children’s knowledge of words, their ability to form sentences and other language skills,” Dr Huda said.

The aim is to determine how a caregiver’s background affects children’s language abilities, and to find out whether being brought up by someone from the same nationality or background could be more advantageous for the development of the native language.

“There are many other developmental aspects to look into when children are brought up by caregivers from foreign backgrounds, and perhaps in future phases I will study these as well,” Dr Huda said.

Hers is one among a series of projects that explore childhood development in the UAE. These studies are being organised by eight fellows as part of the one-year Shamsa Bint Mohammad Al Nahyan Fellowship, conducted in collaboration with experts from Yale University.

Another project will delve into the elements which make classrooms ‘emotionally literate’, and is being carried out by Sara Al Suwaidi, acting manager of the pedagogy and resources section at the Abu Dhabi Education Council (Adec).

The question of whether maids have an effect on children’s language development (or not) in the Gulf has been asked and discussed for many years, and I think it was an obvious choice for researchers to start with this topic. One example is the work in Saudi Arabia by esteemed Prof. Reima Al-Jarf at King Saud University, who has explored how maid’s in Saudi homes have an effect on the acquisition of Arabic by children. I don’t know her methodology or what the findings were and I have been unsuccessful in tracking those down (so if anyone reading this knows where I can get that paper/study please email me- thank you in advance). But apparently it is an area of study that some of the students at that university have/ are carrying out research on.

So now it seems it’s the turn of the UAE. I think that it will be very interesting to find out how the researchers will measure this (effect, if any), what variables they will put in place, and more importantly how long they will give themselves to collect that necessary data. Then once the data is collected, how will they interpret it and understand it, so that it can inform future practice in the country. It is important research, these are important questions, but their significance can only be realised if a strong and robust epistemological approach in methodology and interpretation is used.  I look forward to finding out more about the study and I am sure it will be significant. any suggestions, information or opinions on this story are welcomed as always. A warm welcome to new readers and as always thank you to all those who send in emails, I really appreciate it.